My favorite part of my Zombie Attack Halloween decor this year is this DIY warning zombies sign. I decided to make instead of buying because I wanted it to be personalized and I can never pass on a chance for a fun craft day. After searching around on Pinterest and thinking about what I wanted to do, I came up the this look for my sign. 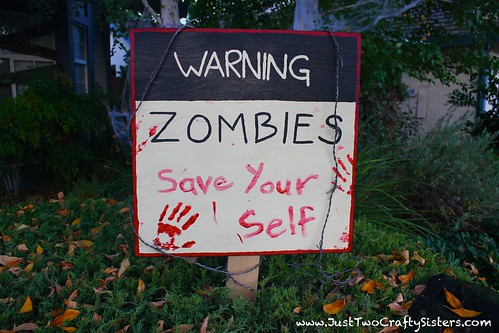 To make this sign you will need a square wooden board, a wooden stake, paint, red gel food coloring and spray acrylic sealant.  To start out I painted the entire board cream.  I then used my yard stick to separate the top section and painted it black.  I then played around with red and black for the outside border of the sign.  Once dried I freehand painted “Warning” and “Zombies”. 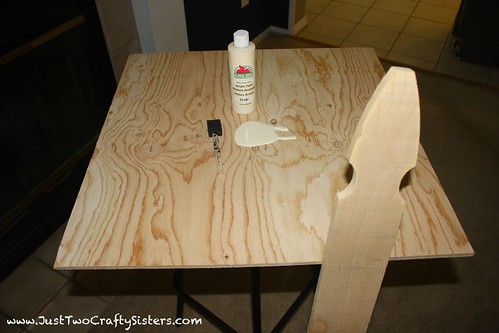 Next I racked my brain on how to do the blood on the sign.  I ended up grabbing a tube of red gel food coloring from my baking cupboard and smeared it all over my hand.  I then grabbed the sign in a few places and used one finger to write out “Save Your Self”.  The texture of the gel food coloring gave some great depth and detail and really looks like blood. 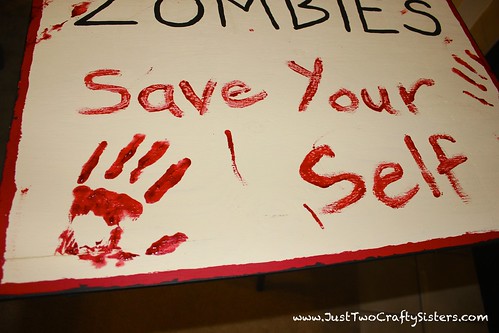 After letting it dry for over 24 hours, I took the sign outside and added multiple coats of clear acrylic spray paint.  The red food coloring has already faded a bit and is really not water resistant.  I am not sure if it will hold up all that great over time, but I can always re-do that portion for the future if it fades away. 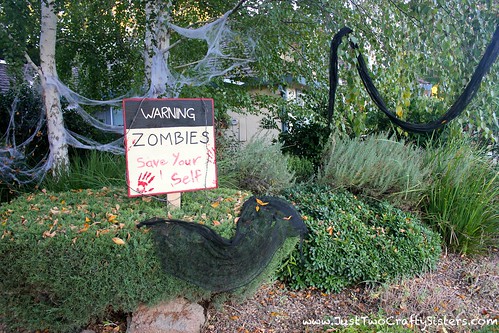 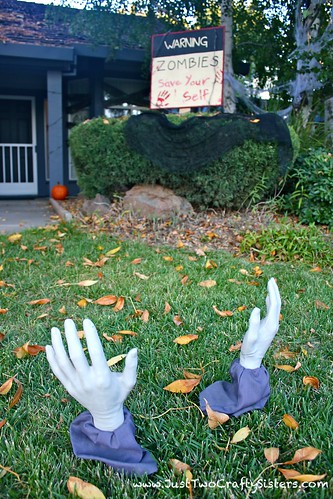 Don’t have time to make a zombie sign?  Good news is that there are a ton of them out there to buy and they run about $10-$15 a piece.  Here are a few examples I saw at the Spirit store that would have worked great too.

I LOVE Halloween!  This year for our outside decor I decided to go with a zombie attack theme.  I had big plans of going all out, but kept it pretty simple in the end to save money and time while still having fun. So, let’s go for a tour around our front yard… 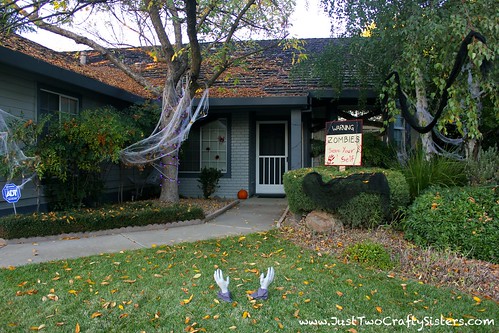 Let’s start out in the little cubby area next to our front door.  Same as last year, I began by adding some webs and spiders.  I decided to use regular webs this year, since the black light ones did not light up as well as I hoped. 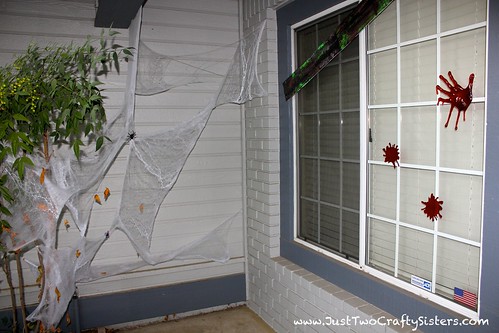 .  These clings are awesome and help to add some gore to the zombie attack theme. 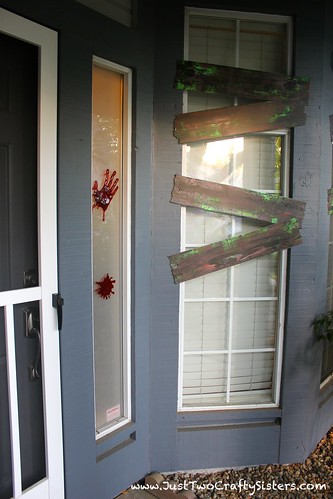 or the Spirit Halloween stores that pop up during this season, we were able to find some foam distressed boards to use on our windows.  I tried using double sided tape, but after a couple hours they started to fall.  So I pull out my staple gun and secured each plank to the wall around the window.  For the bigger windows I was able to tape two planks together and span the gap that way. 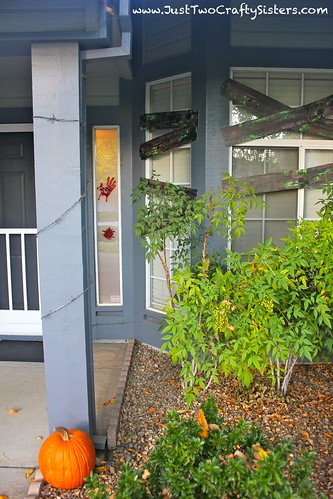 I also found some fun fake barb wire and wrapped the front post with it.  It looks to be just twine rope painted in silver, so I might make my own in the future if I need more.  I bought two stands this year and saved the second strand to use on my zombie sign. 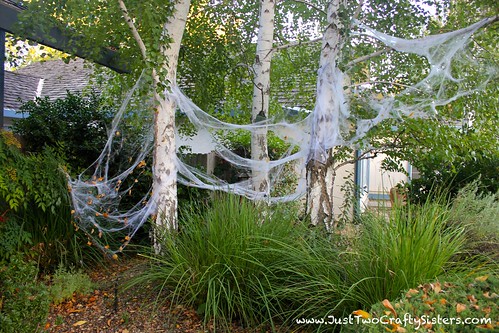 Panning over to the trees along the path, I added more spiderwebs and glittery spiders.  I bought 3 bags of web this year and was able to cover a lot more area than last year.  I did the same look on the main tree in front of our house by wrapping it in purple lights and then web and spiders.  I bought new lights because the cheap ones from Party City last year kept failing.  These are much more vibrant LED lights we picked up on sale at Target right after Halloween last year. 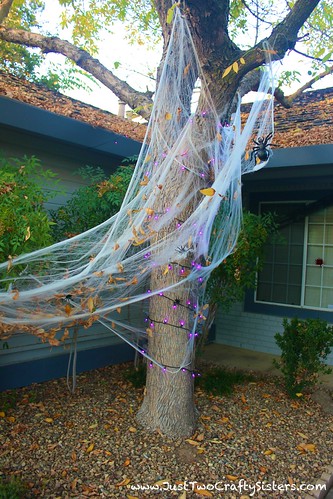 To add some creepiness we have our native giant spider making an appearance too again this year.  He is much too heavy for the web, so I use thread to tie him the the branch for added support. 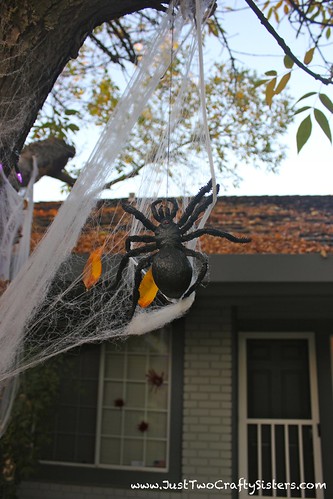 Now on the the main new additions this year. Since I had so much fun last year making the wooden trick or treat sign, I decided to do it again this year by making a warning zombie sign.  You can learn more about how I did it here. 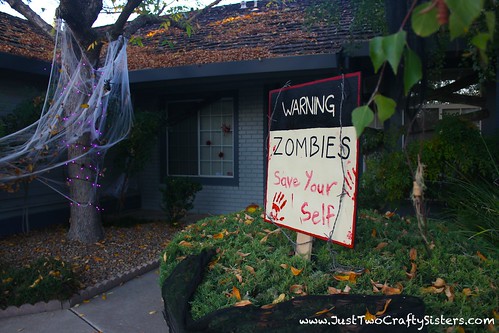 I am really happy with how the sign turned out and it really adds to the overall look and theme.  I had some left over black cloth from last year so I simply covered the bush and threw some more up in the tree.

This big bush came in handy for the sign too.  Instead of having to hammer it into the ground, I stuck it into the bush and done. 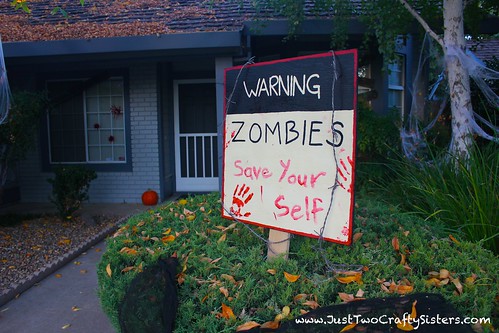 One finishing touch…adding some zombie hands to the lawn, also found at the Spirit store.  So there you have it, cheap and fairly easy Zombie Attack Halloween decor. 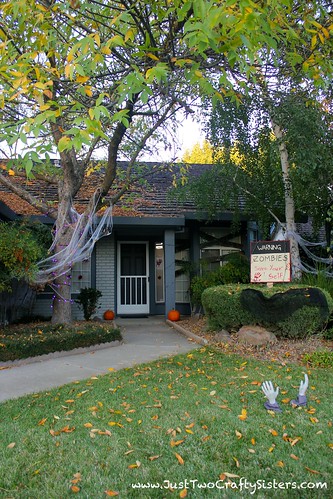 Still need some last minute Halloween items or want to buy now of next year?  Enjoy 20% off and shop lots of sale items.

Last year for Halloween my husband and I dressed up as a zombie and zombie hunter.  It was so fun working on our costumes and coming up with the overall look and zombie makeup.  My zombie costume was themed as a sorority girl zombie.  All great zombie costumes must have a back story, right? I meant to post this afterwards, but almost a year later I am finally getting around to writing it.  So, without further ado, here is a quick tutorial how-to make yourself look like a zombie: Step 1: Gather all your supplies needed to achieve your desired zombified look. I used the following:

Step 2: Start with creating a pale white base layer all over your face.  I first used my white cream make-up on a triangle sponge to get a nice coating of white color.  I then used my Bare Minerals Mineral Veil over the top of help seal it in.  This made it a bit splotchy, so be careful when adding a powder over the greasy Halloween makeup.

Step 3: Now on to the eyes. Using a black eyeliner pencil, I did a nice thick line along my top and bottom lids. Next I took my plum color eye shadow (MAC Trax) and using my finger as the applicator I made large purple circles over my eyelids and under my eyes, making both of my eyes look blackened and sunk in.  I then used my darker MAC color (Beauty Marked) over the same area to darken it even more.

Step 4: To give my face a bit more detail, I used the same eye shadows under my cheek bones.  Not sure if they just looked like bruises, but either way I liked the way it brought more appeal and detail to my overly white face.

Step 5: And finally on to the lips.  Being that I did not want to spend money on a dark lip stick, I went with what I already had on hand.  I used the dark MAC Beauty Marked eye shadow on my lips along with some lip gloss and I think it worked great.

Step 6: Now on to the final touches.  I added a little mascara and worked on my hair.  Being that I was a zombie sorority girl, I opted for messy pig tails.  And last but definitely not least, I popped in my amazing white contacts to complete the look.  Pretty creepy and oh so fun!